After a gut-wrenching last minute goal gave Russia a draw against the far better England, violence broke out. Throughout the day before the match there seems to have been skirmishes between England fans and Russia fans with also the police being involved by firing tear gas aimlessly in attempts to disperse the crowd.These skirmishes before the game lead to many England fans bloodied and having to go to hospital. Although the England fans were not totally innocent in these events it does seem that the fights were instigated by French youths and Russian Ultras trying to get a fight and a reaction from the English fans. This is incredibly unfair on the English fans because many who were fleeing the situation were targeted by French Police with tear gas because they were seen as ‘aggressors’. This was the first of many mistakes of the French Police.

Once 8pm came most of the fans were inside the stadium and there was a jovial, positive mood around the fans. There was not much confrontation between the fans at this stage however the England fans greatly outnumbered the Russian fans and therefore made far more noise. Things started to go wrong in the 90th minute when a flare was set of in the Russian area of the ground. This begs a very important question that if a flare can make it into the stadium surely something that could be used for terrorist purposes could be taken in and this would cause unbelievable damage in such a densely packed stadium. Two minutes later there was a considerably louder bang that has remained unidentified but may have been a rocket or a flare gun. This furthers the question of what were the French security doing allowing Russian fans get these ‘weapons’ into the stadium.

After the second ‘bang’ Russian fans charged into the England section by walking over the pathetic barrier trying to separate the fans. Along with there being little protection between the fans, there were no police to stop these Russian fans charging. There were a few powerless stewards trying to split the fans but they were outnumbered and outpowered. As these advancing Russian fans made their way into the England section attacking all those who had a touch of England kit on them, many England fans scrambled away in panic. Reports suggest that some women and children were trampled on during the fleeing. Many England fans did try to retaliate against the Russians but these ‘fans’ were bodybuilders one fan suggested. It is clear that many of these Russian ultras were trained fighters looking for brawl with drunk English fans. 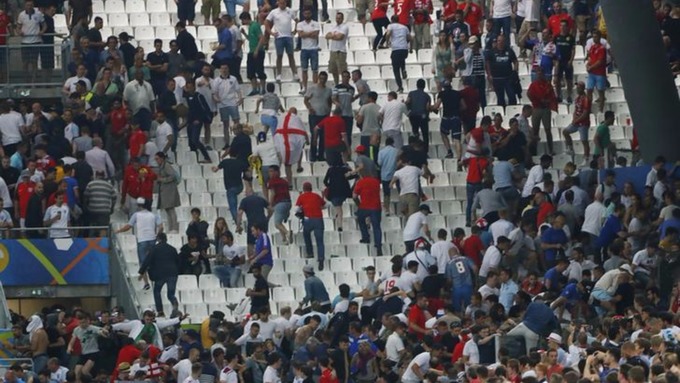 The images of fans scrambling away are reminiscent of those from Hillsborough in 1989. A scary sight for any football fan. These Russian fans were extremely brutal and early indications show that 2 England fans are in extremely serious condition in hospital while 20 others have been hospitalised with less serious injuries but still needing attention. Reports from many England fans were that small groups of 6 or 7 Russian Ultras would attack together against one or two England fans and therefore outnumber them and do some serious damage.

As the England fans flooded out the stadium to try to get back to their hotels in seems as if the Russian fans followed them. Although nothing has been confirmed reports came out that locals have reported a death on the metro tube of an Englishman. Still unclear and nothing has been confirmed it was suggested that he was pushed onto the tracks but this is still unconfirmed news. The two other fans were described as fighting for their lives and having to be resuscitated by CPR. Their future awaits as the whole of England hopes for their safety. 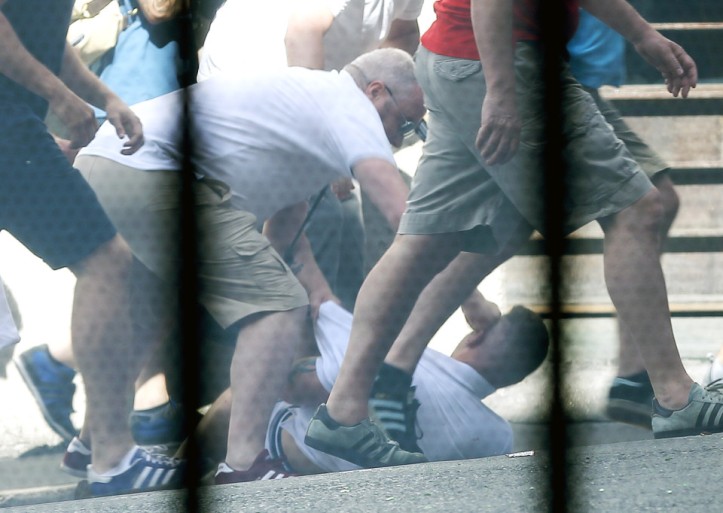 Image from The Sun

England fans were not innocent though because there were instances where England fans were seen throwing bottles and chairs at French Police and Russian Ultras. However there were very few England fans that put lives of other fans in danger. The Russian Fans have been described as ‘knife-wielding’ showing that there ambition was to do serious damage or even kill England fans.

Overall it seems as if the lack of a security presence at the games is what allowed this destruction to occur. This is just very strange because this is supposed to be the most protected event the world has ever seen on such a big scale. How could this violence occur with so many French Policemen on duty at the time?