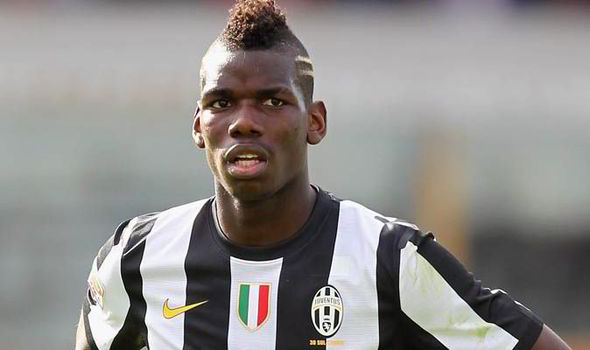 IMAGE FROM THE EXPRESS

With Paul Pogba’s move to Manchester United becoming an inevitability, the €120m transfer fee being paid to Juventus shows an indication that clubs are willing to spend astronomical fees for young, rising stars, who have the potential to develop into the very best in their respective position. Rather than purchase a ready-made, world-beater who cannot be sculpted into one.

There are multiple factors to take into account with Pogba’s transfer, his marketability for one, profit and revenue gain for the club, however his age and clear talent are indicators to why Manchester United will make an unprecedented risk. It’s based on the potential and the premise that he could one day become a great.

In the same week, we have seen the transfer of Gonzalo Higuain from Napoli to Juventus for £75.3M, a superb striker who last season broke the Serie A goal-scoring record for the season with 36 goals. The transfer however was met with controversy. His age being the key factor, the argentine forward is the finished article and with little to no re-sale value, the transfer could be compared to Manchester United’s capture of Robin Van Persie from Arsenal, the Dutch striker was 29 at the time of signing. Both were transferred with immediate success and time in mind. Both clubs were in the same position of guarantying results in-order to gain silverware.

The market is shifting however, if you take into account in 1996 a young Brazilian striker named Ronaldo was transferred from PSV Eindhoven to Barcelona for £13.2M and Alan Shearer from Blackburn Rovers to Newcastle United for £15M. Both were aged 19 and 25 and were the very in their position, they also finished second and third in the Ballon d’Or. Fast-forward to 2016 and the former Napoli forward did not make the 23-man shortlist for the highest individual award and is still worth £75.3M.

Four key transfers from 2013-2014 show that in the modern game, the younger, talented player has more worth, for example, James Rodriguez was transferred to Real Madrid from AS Monaco fro £63M, Manchester City signed Kevin De Bruyne for a club record £55m and Raheem Sterling for £49M, each player younger than 25. The above transfers show a clear outlook of planning for the future, to sustain success and build on youth development.

Although Europe’s elite is willing to spend on a ready-made, world-class player, they are few and far between. The universe that is football is moving rapidly and the shift to youth and the fees they command will only rise. The days of a Zidane-esque midfielder being transferred at the age of 29 are becoming a rarity.

We are at an age where clubs will continue to shift their focus to search for another young, mercurial talent who can take on the world, similar to that of a certain diminutive Barcelona forward, no matter what the cost.