Depending on who you support, the new season is either just about to kick off, or has just started. However, for some fans, the new-season cheer isn’t there, it’s simply a case of “same sh*t different day”. I’m not sure if I’ll include every club in this list, if I miss yours out, apologies, but with this in mind here I take a look at some of the football clubs in England who need new owners as soon as possible, for the sake of the club’s future. Here’s hoping I get through this without placing my entire life savings in a charity swear jar.

Arsenal – I have to start with my own club, which is unfortunately run by “Silent” Stan Kroenke. This moron – got to keep it clean as possible after all – is only the owner of the Gunners for one thing – MONEY. Not only does he see fit to charge the fans the highest prices in the country, he doesn’t even use it to improve the club. Despite the fact that every man and his dog pretty much knew Arsenal needed a world class CDM, Striker & Centre Back, we still do not have the latter two, and Kroenke allows this, as the more that’s is spent on transfers means less money for another ranch in the States. He even came out in a recent and rare statement where he said that he didn’t get involved in Arsenal to win trophies. As a little side note, it’s not just Arsenal he’s ruining but several franchises in the US as well. The day he and his son Josh do one out of Arsenal will be the day I celebrate like there’s no tomorrow, even more so if he leaves the clubs in the States that he is wrecking, as well as the gunners. As has been sung at games and posted on social media “Stan Kroenke, get out of our club!”

Hull – Another premier league club with a owner that doesn’t care for the club. Assam Allam – hope I spelt that right – has decided to urinate on years of history by changing the club’s name to “Hull Tigers”. Needless to say,  this hasn’t exactly gone down too well with the Tigers faithful, with protests and chants of “City till I die”. With staying in England’s top division their main priority, you’d think that a new manager would be a priority, but the man doesn’t seem to care, as he is taking his sweet time about it. Assam has also overseen an injury crisis of epic proportions and has done absolutely nothing to sort it out, so that, come their premier league opener, Hull were not fit enough to have a fully fit 1st XI. Even their own players have been taking the Mick. He has put the club up for sale, and is taking his time selling up. He needs to go, or Hull will most certainly end up confined to the ash heap of history.

Leeds – The owner Massimo Cellino is clearly in no fit state to run the club. How the hell he passed the ‘fit and proper owners’ test I will never know. Under his regime, Leeds have gone through managers like a fat man through butter, with Gary Monk being the latest on the conveyor belt. I give it a few months before his head is on the chopping block as well. Fans have turned on him, whereas before they were singing ‘the football league’s corrupt’ now they can’t wait to see the back of him. And I can’t either.

Charlton – Roland Duchatelet doesn’t care about the club, as seen by the fact that he has oversaw their relegation into League One.  Protests were ride last season, and I can’t blame them. The fact that they were cheering their rivals scoring, and purposely getting games delayed or called off tells its own story. At the last game of last season, fans of both clubs stormed the pitch and sung ‘we want Roland out’. The sooner he goes, the better, or else I can seriously see Charlton descending into non-league obscurity within a few years. 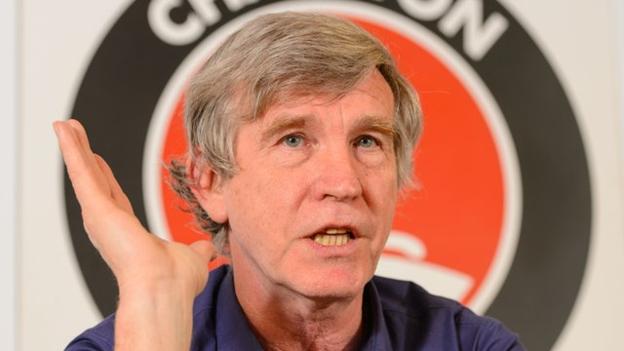 Newcastle – Under Mike Ashley they have fallen from grace dramatically. What was inevitable for years has finally happened, and they have been relegated. Mike Ashley is now spending big, but it is to get back among the cash. He also treated Jonas Guiterrez with no respect. Trying to force him out when he was being treated for testicular cancer, Jonas comes back and scores to keep Newcastle in the Premier League last season. He was also one of the club’s most loyal servants. Mike Ashley didn’t even have the decency to do it to his face, and released him by phone. He needs to go.

Blackpool – Arguably the worst of the bunch are the Oyston family. Despite them being, in Mr Oyston’s own words “a cash-rich club” they have now been relegated to League Two and I can seriously see another drop into non league awaiting them this season. Much like Arsenal, although on this case it’s much more severe for the Seasiders. Karl Oyston is the very definition of “megalomaniac nutcase” – he has actually ban fans from the ground for disagreeing with his opinions, and even worse he SUED a fan for criticising him. It’s utterly absurd. Forget “the Seasiders”, a fitting and accurate nickname for the club under his stewardship would be “football’s dictatorship”.

Bad owners are a stain on football, and no fans deserve an owner who will treat their club with so little respect. The Sooners these idiots do one, the better.