Seven points still separate Crusaders and Linfield at the top of the Dankse Bank Premiership after Saturdays results.

Crusaders came away from the oval with a 3-0 victory over Glentoran thanks to goals from Declan Caddell ,Gavin Whyte and Paul Heatley .

Caddell opened the scoring with a free-header before two minutes later the best player in the league so far this season Gavin Whyte danced his way down the wing before slotting under Elliot Morris.

Just before the break Nacho Novo received his marching orders for a head butt on Caddell afterwards Glens manager Gary Haveron saying that his side would put in an appeal.

The second half was a dead rubber with Glentoran down to ten men and against the midfield of the champions found it to tough to take .

With fifteen minutes left Crusaders sealed the victory after a poor defensive error allowed Heatley through on goal to calmly finish.

Linfield won 2-1 away at Glenavon thanks to goals from Aaron Burns and talisman Andrew Waterworth .

Burns put the Belfast Blues ahead midway through the first half with a thumping finish leaving former Linfield keeper Jonathan Tuffey with no chance .

It was the travelling side who thought they had a second when Mark Stafford had the ball in the net but it was ruled out for a handball.

Staffords dramatic day continued in the second half as he gave away a penalty for handball up-stepped Andy McGrory to fire past Roy Carroll to level the scores.

Glenavon were then reduced to ten men to Gary Hamiltons frustration as Ciaran Martin saw his second yellow card for an off the ball incident .

Linfield then took advantage as Waterworth scuffed home the winner for the visitors .

Cliftonville stay in third after a hard fought victory over Ards , Cliftonville suffered an early setback at Solitude when Michael Ruddy scored a spot-kick for Ards in the 30th minute after Levi Ives was penalised for handball.

Ballymena United were also forced to mount a comeback at the Showgrounds after Dungannon took the lead thanks to Kris Lowe’s thunderous effort from Paul McElroy’s cross which went in off the underside of the bar after 14 minutes.

Kyle Owens equalised with a glancing header one minute after the resumption and Tony Kane rolled the bottom into the bottom corner for his 12th penalty of the season on 57 to nudge David Jeffrey’s side ahead after Johnny McMurray had been dragged down.

The league’s leading goalscorer, Andy Mitchell, took his tally to 19 on 62 minutes, tapping over the line after his initial effort went through the legs of Ross Glendinning and stuck in the mud.

Central defender Caolan Loughran popped up to nod in the winner with a bullet header from Kane’s delivery in the 78th.

Coleraine’s 4-2 victory at the Showgrounds was marred by an injury to Bannsiders striker Eoin Bradley, who was stretchered off in the early stages after a lengthy delay in play with broken ribs and a punctured lung.

Adam Foley gave Portadown a first-minute lead with a sweetly struck left-foot shot but Brad Lyons levelled and then headed home his second of the game from a corner.

Alan Byrne followed up to score for the visitors before half-time after Chris Johns had saved Foley’s initial snapshot.

Neil McCafferty curled in a brilliant free-kick to edge Oran Kearney’s outfit ahead, while Darren McCauley grabbed the fourth two minutes from time. 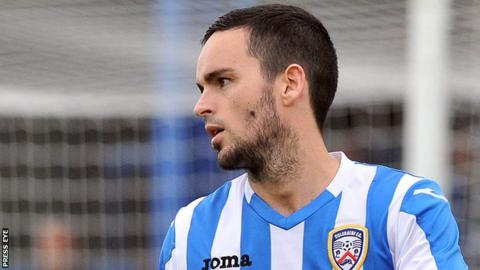 Ballinamallard won Fridays big game at the bottom 2-1 against Carrick Rangers thanks to a double from Joshua Mcllwane.

Carrick, replied through a late Ryan Morris own goal, but defeat means they remain nine points ahead of bottom-placed Portadown.

That form has hoisted them clear of immediate relegation concern, while Carrick have taken just two points from a possible 21