Gus Skinner runs us through the 15 Premier League matches this gameweek:

If there was ever a six pointer this is it. Norwich are 4 points clear from Sunderland down by the relegation zone however Sunderland do have a game in hand so if they win here they will be a point behind Norwich.
Norwich have shown signs of revival recently but their loss to Crystal Palace last weekend has plunged them straight back into trouble. Sunderland have been pretty good since the turn of the year performance wise but they have been drawing too many games which is very frustrating for Big Sam.

They have a habit of conceding late goals and if they want to stay up they need to have a more sturdy defence. I can’t see either team taking all three points but it is going to be another two points dropped for the Black Cats.

Nobody would be surprised to see Martinez be sacked and that shows how under-performing his team are. I say this every week about how Everton with Lukaku and Barkley surely have to be challenging for top 6 but week after week their defence lets them down. John Stones probably should have been sold for the lucrative price of £35 million to Chelsea looking at his form this season. Sadly for Everton they are playing the in-form team at the moment. Pelle has rejuvenated his time at Southampton with some clinical finishes and Tadic seems to be finding form as well. I can see the Saints causing more pressure on Roberto Martinez here. 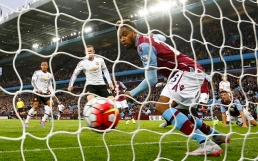 Finally something breaks Louis Van Gaal’s way. If anyone could dream of a fixture right now it would have to be Aston Villa at home. The Red Devils are into the FA cup semi-finals which is a good effort seeing as they have played a lot of games this season. Marcus Rashford looks like a good one for the future with his superb goal in the FA cup on Wednesday night and you can expect him to cause Villa’s fragile defence problems. Villa will probably be down mathematically this weekend and it can’t come soon enough. There is a vile atmosphere around Villa Park and so there should be. The club that came sixth in the Premier League five seasons ago is going to go down with four games to go. Another Villa meltdown.

Rafa Benitez has had an effect on the player’s morale as they seem to be trying a lot harder on the pitch now than when McClaren was in the job however results haven’t come in and they looked destined for relegation. The money has been put it in but the players haven’t stepped up to the mark. Swansea, along with a little help from Gylfi Sigurdsson, have been transformed over recent weeks and are in great form which led them on to beat the unbeaten under Guus Hiddink Chelsea team last week. I can see them putting out any hope of survival for Newcastle this weekend.

Both teams are safe with not much to play for. Therefore you can expect both teams to give it a go and play attacking football however recently Watford have really struggled going forward and the goals just don’t seem to be in the team like they were early on this season and coming up against a Tony Pulis defence is never easy. West Brom have done their usual thing of securing safety with 5 games to go and nothing to play for but this season they seem to have discovered or rediscovered some talent in Rondon and Sessegnon. I think the Baggies will just nick it.

At the beginning of the season this looked like a mouth-watering fixture with five games to go, this could have been the title decider but strange things have happened this season. Chelsea seem to have regained some dignity with some good performances over recent weeks and their loss to Swansea was surprising. Manchester City created new history for their club making it to the semi finals of the Champions League for the first time and that seems like a viable way for them to qualify for next year. Mangala and Otamendi seem to be building up a good relationship which could put down all the critics of their defending this season. City are getting back to full strength so I think that City will dominate Chelsea here.

Bournemouth have managed unbelievably well in their first season in the Premier League especially considering they have played the majority of the season without Callum Wilson. He was on the bench against Villa last week and I think Eddie Howe will leave it that way again with the good football the team is playing at the moment. Liverpool have started to look good under Jurgen Klopp and last week’s victory against Stoke was most impressive. Sturridge is coming back to fitness which is great for EURO 2016 but also the remainder of Liverpool’s season. I think Klopp’s men are going to trouble the Cherries.

Leicester need three more wins to lift the Premier League trophy and you wouldn’t bet against them not winning all five of their games left. Unstoppable at the moment. It would be a fairytale ending to incredible season for Leicester. Ranieri showed emotion for the first time last weekend against Sunderland and that tells you a lot about how confident he is that Leicester can do it. It has been a fitting season for West Ham in their last year at Upton Park. They are playing great football and could be in Europe next season but they do have to pick something up from the foxes this weekend to keep that alive. West Ham will give Leicester a good run for their money but Leicester have got a hand on that trophy now.

Arsenal seem to playing better football and Sanchez is getting back to his best but they are not being helped by some below average defending especially by Gabriel. He was all over the place last weekend against West Ham and allowed Andy Carroll to dominate him. Alex Iwobi looks like a breath of fresh air in the Arsenal side being included in 4 goals in his last 3 games. He looks very good for the future. Palace have stopped the rot recently and secured Premier League survival which is all they really had to do this season. Adebayor has quite worked for them yet but the man does score goals and I am sure in due course he will pick up his fair share. Arsenal at home will cause Palace problems and I can see Sanchez bagging a couple.

Stoke can only look back on what their season could have been. They have the talent at club and they have shown resilience but they just lack that clinicalness which the teams above them seem to have. I look forward to seeing Stoke next season and them pushing on for a top 6 place. It must be gutting for Tottenham, they have finally got above Arsenal, Manchester City, United, Chelsea but only for all the attention to be stolen by Leicester. They continue to play the best football in the league at the moment and follow Leicester’s footsteps but their title hope seem to be gone now but it has still been a great season for Spurs which they shouldn’t forget. I can see Leicester going nine points clear with Stoke clinging on for a point.

City are going to cause Newcastle lots of problems. If Newcastle had any hope of staying up it is going to disappear here. I expect City to use Silva and De Bruyne on the wings and try and get behind Newcastle’s full backs with the help of Sagna and Kolarov overlapping. This will open up lots of space because Townsend is not known for his running back to help in defence. City will dominate again here and I would bank on Aguero getting a few.

This will be a good london derby just West Ham will try and exploit the recent poor form of Watford and you can guarantee Payet will be involved some how. Lanzini also will look to get in between the watford lines to have some shots from range. Watford to offer little in reply.

This could be Martinez’s last Merseyside derby if Everton’s form continues. I expect the atmosphere to be electric after the heroics in the Europa League on Thursday. Klopp will inspire his men to try and get champions league by finishing fourth and you never know because they have the games in hand. Everton will be up for the fight as well but whether they can turn that fight into results is yet to be found out. There is going to be goals here.

United will look to use the pace of Rashford and the big pitch at Old Trafford to get behind Palace’s relatively slow defence of Delaney and Dann. United could even play a 4-4-2 formation here but the key for them is to keep it on the ground because Palace are very good at clearing aerial balls into their box. Palace will carry a threat with Adebayor but it is whether they can find him.

The last game of this bumper weekend is going to be relatively one-sided with Tony Pulis setting up to frustrate Arsenal and I think they will be able to keep Arsenal down for the majority of the game but eventually Arsenal will get through and when they do the flood gates will open.