A legend is set to say goodbye this Sunday as Antonio Di Natale will play his last ever game for Udinese when they welcome Carpi.

The 38 year-old has spent 12 years of his career with the Italian club, signing in the summer of 2004 after his club Empoli were relegated to Serie B. Since then Di Natale has made 379 appearances for the Udine club.

His best goal tally came in the 2009-10 Serie A campaign as the striker scored 29 goals, contributing 54% of Udinese’s final goals scored that season. Di Natale also surpassed Oliver Bierhoff’s record of 28 league goals in a single Serie A season.

Currently, the Naples born striker is sixth on the all-time goalscorers list for the Italian top tier of football, with 208 league goals. 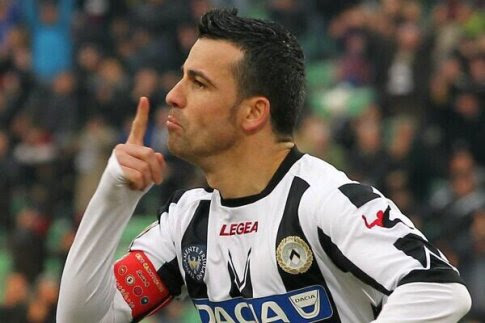 In 2013 Antonio Di Natale nearly made the switch to Chinese side Guangzhou Evergrande but in the end decided to say with Udinese. At the end of that 2013-14 season he had already decided to retire, ”I have already decided, in June I’ll stop playing football. It’s already established”. However, continued to play on for the following two seasons.

At the age of 25 Di Natale made his International debut for Italy, in a friendly game against Turkey in November 2002. It wasn’t until 6 years later though when he made his major tournament debut at the European Championships ’08. Continuing to play in the 2010 World Cup and the 2012 Euros, Di Natale decided to call it a day on the International scene as he retired after Italy’s 4-0 Final defeat to Spain at the Euros. His Italy career would end with 11 goals from 42 caps.

The 2015-16 season hasn’t been what Antonio Natale surely hoped for, with a injury-hit year he has been limited to just 12 league starts. In an interview with ‘Goal’ the striker said “Udine has given me so much. I’m grateful for the way this city has treated me and I’m very happy here. I want to applaud our fans. They’ve always been exceptional.”

The Italian has not yet decided to retire, but is most definitely set to leave Udinese this summer, with rumours suggesting Di Natale will move to the MLS for his final season.