The 2014 FIFA World Cup held in Brazil was a disappointing one for England. They didn’t make it to the knockout rounds having been drawn in Group D with Italy, Uruguay and Costa Rica. It was always going to be a difficult group considering the teams involved, and England’s elimination wasn’t particularly a big shock. However, it was the manner of their elimination that drew questions – they failed to win a single match, scoring twice and conceding four times.

Their second match was a 2-1 defeat against Uruguay courtesy of two goals from Luis Suarez. The defeat almost certainly sealed their fate after they lost by the same score line against Italy in the first match. Their final match was a dead rubber, a goalless draw against Costa Rica.

The two goals they conceded against Uruguay were interestingly similar – they both came as a result of Steven Gerrard mistakes deep in the middle of the park. The first, Uruguayan midfielder Lodeiro drove through the center of the park on the counter, easily powered past Gerrard and switched the ball to Cavani, who teed up Suarez for his header with a nicely lofted pass over the England defense. The second was much more basic. A drop kick from Uruguayan goalkeeper Muslera, a weak attempt by Gerrard on the air ball resulted in him inexplicably flicking the ball backwards perfectly to Suarez who finished ruthlessly past Joe Hart.

The goals perfectly summarized Gerrard’s decline and England’s weakness. Somewhat harsh considering that was not his natural position. It also begged the question: why Michael Carrick – a natural in that position – was frustratingly ignored yet again.

The modern central defensive midfielders appear in two molds – The battlers and the deep lying playmakers. The battlers are energetic, physical tacklers who protect their defense with great stamina. They are not usually creative so they concentrate on short distributions to their more creative teammates. The likes of N’golo Kante and Francis Coquelin fall into this bracket. The deep lying playmakers are more proactive, relying on their intelligent positioning and reading of the game to protect their defense. They also possess very good passing range, spraying forward passes and dictating the tempo of the game from deep. Xabi Alonso and Sergio Busquets are typical examples. 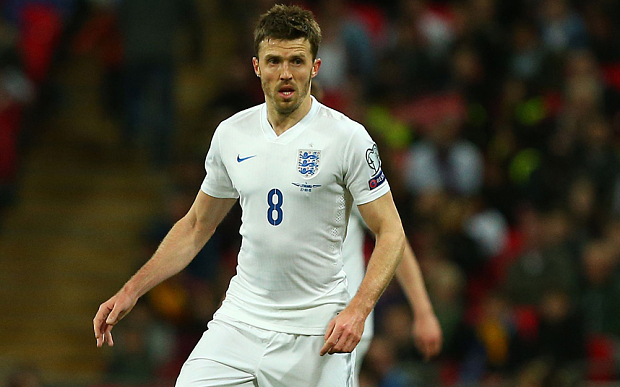 Michael Carrick nicely falls into the latter mold. Perhaps one of the most underrated midfielders of his generation. Carrick possesses great defensive positional awareness, one of the reasons why you rarely see him diving into tackles and getting physical. He is rather an adept interceptor who intelligently shields the defense by cutting passing angles of the opposition forcing them to make different decisions, thereby cutting out the danger before it arises. These qualities have seen him deployed as a makeshift center back for Man United many times. He is also an excellent passer, two footed and positive in possession. Undoubtedly one of the main plugs in the Manchester United successful teams of the later Sir Alex Ferguson era, the fact that he was continually ignored by England remains a mystery. Sir Alex once stated that Carrick’s quiet, unassuming nature is part of what makes England managers overlook him for the more glamorous names. The fact that he remains arguably Man United’s best midfielder since the retirement of Paul Scholes is a testament to his quality and consistency, more so considering the huge amount of money spent on player acquisitions since then.

A good measure of how important Michael Carrick is to the team is how highly his teammates, managers and peers rate him. Carrick was voted Manchester United’s Players’ Player of the Year in 2013, Ferguson’s title winning farewell season. These are quotes from some of the most important names in world football;

“In English football sometimes it seems hard for people to rate those who instead of shining themselves make the team work as a collective. For example Michael Carrick . . . who makes those around him play.” – Xabi Alonso

“Scholes and Carrick together was peaceful. It was like going into a bar and hearing a piano playing. It’s relaxing.” – Gary Neville

“Carrick gives United balance and can play defensively too. He passes well, has a good shot and is a complete player. – Xavi, speaking prior to the Champions League final against United in 2009.

“Carrick could play for Barcelona, he has good vision and is an intelligent player”. – Arsene Wenger

“Michael is a different breed to the likes of Roy and Nicky Butt,” said Scholes. “They were brilliant, but so is Michael in a different way. He brings calmness to the game and parades around the pitch like a Rolls-Royce. I’ve always found him very easy to play with. He’s capable of doing anything. He can create goals, score goals, he’s a great passer of the ball and is a big strong lad with a lot of presence who can run all day long. – Paul Scholes

“Not only this season but every year. People do not realize the amount of work Carrick delivers until he has gone. – Thierry Henry, labeling Michael Carrick as one of the most underrated players of his generation.

“Michael Carrick is a magical midfielder and another who goes about his work with little fuss. – Harry Redknapp

Once again, he has been omitted from England’s 23 man squad heading into Euros 2016. Although, in Eric Dier, England have got a defensive midfielder capable of performing a decent job in shielding the defense.

At 34 years of age, it’s hard to imagine that he will add to his 33 international caps. Perhaps, this has worked in favor of Michael Carrick in terms of the longevity of his Man United career. His contract was due to run out this summer, but club icon, Paddy Crerand, recently revealed that he will be offered a one year extension. This shows that he is still valued by the club and he will be looking to continue dictating play under the new manager Jose Mourinho.